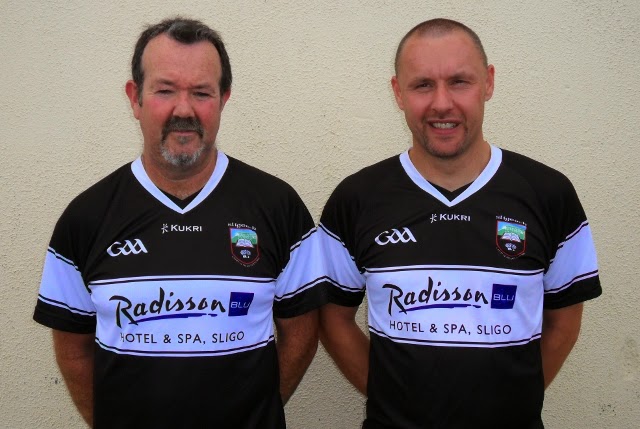 Collooney players will be involved in 3 more Connacht doubles finals. Up first is the Junior C Doubles with Gerry Coleman & Michael Bruen into another Connacht Final.  The duo are knocking on the door for the past few years without actually finding a way through. In their semi-final  contest after a shaky start the Bruen & Coleman weathered the storm and began to take control playing controlled and incisive handball along the way to an exciting 18-21, 21-8, 21-8 win over  Roscommon’s Alan Mannion & Robbie Kelly.  They again will need to produce the goods against Galway’s  Michael Rianne & Chris Connaughton.  Curraghboy may just be the venue for the historic breakthrough for Bruen & Coleman

In the following match sees the Emerald Masters doubles pairing of Michael McMorrow & Michael Murphy take on the experienced Frank Macken & John O’Mallley.  McMorrow & Murphy are a new partnership and as yet untested having received a bye in their semi-final.  Macken & O’Malley already had an successful outing the in the championships having beaten Galway’s  Pierce Lalor Willie Corcoran in their semi-final.  Murphy is making a welcome return to handball and the Castleconnor club man will relish getting into competitive handball after a lengthy lay off from the game. Michael McMorrow is training hard with the likes of legendary Sligo player Paddy Walsh putting him through his paces. McMorrow an All-Ireland 60 x 30 doubles champion with John McLoughlin in 2011 will be hoping for a repeat of the glory days in the smaller 40 x 20 court. It remains to be seen have the fledging Sligo partnership done enough work  to compete against the battle hardened Macken & O’Malley. The greater experience by Mayo,  may win the day but McMorrow & Murphy have nothing  to lose and will give it everything in the  Sligo colours.

From one doubles team starting off to another combination who already tastedAll-Ireland success.  The Masters A doubles team of Shane Bruen & Martin Cooney had an unbelievable 2014. Cooney won 3 titles the Silver Masters  B  40 x 20 singles and followed this up winning the Silver Masters B singles 60x 30 title and Masters B doubles with Shane Bruen. Shane also won the Masters B singles for good measure.  Cooney was recently recognised by the Connacht G.A.A Council at their recent annual prize giving awards ceremony  in Castlebar for winning 3 All-Ireland handball titles in 2014.  The step up to the A grade does not seem as undaunting  for the duo who are well capable of making a big impression in the A grade. Their opponents are from the nearby Bofield Club. Mayo’s Jason Judge & Patrick Foy were All-Ireland  Masters B doubles champions in 2013. The final has all the hallmarks of going the distance and don’t be surprised if this one goes to a tie break to separate them.  Bruen & Cooney get the nod to herald their entry into the A grade with a Provincial title at their first time of asking.