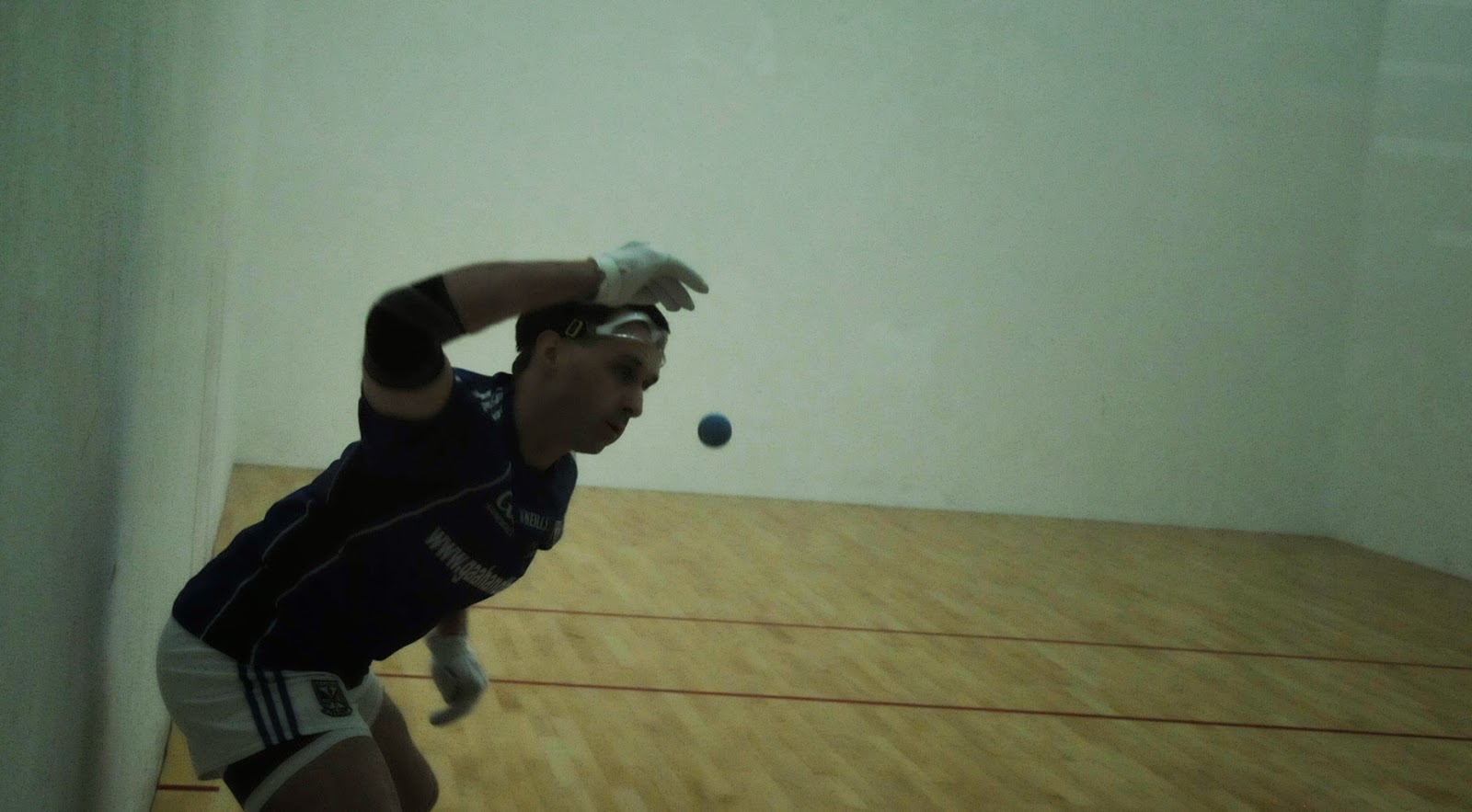 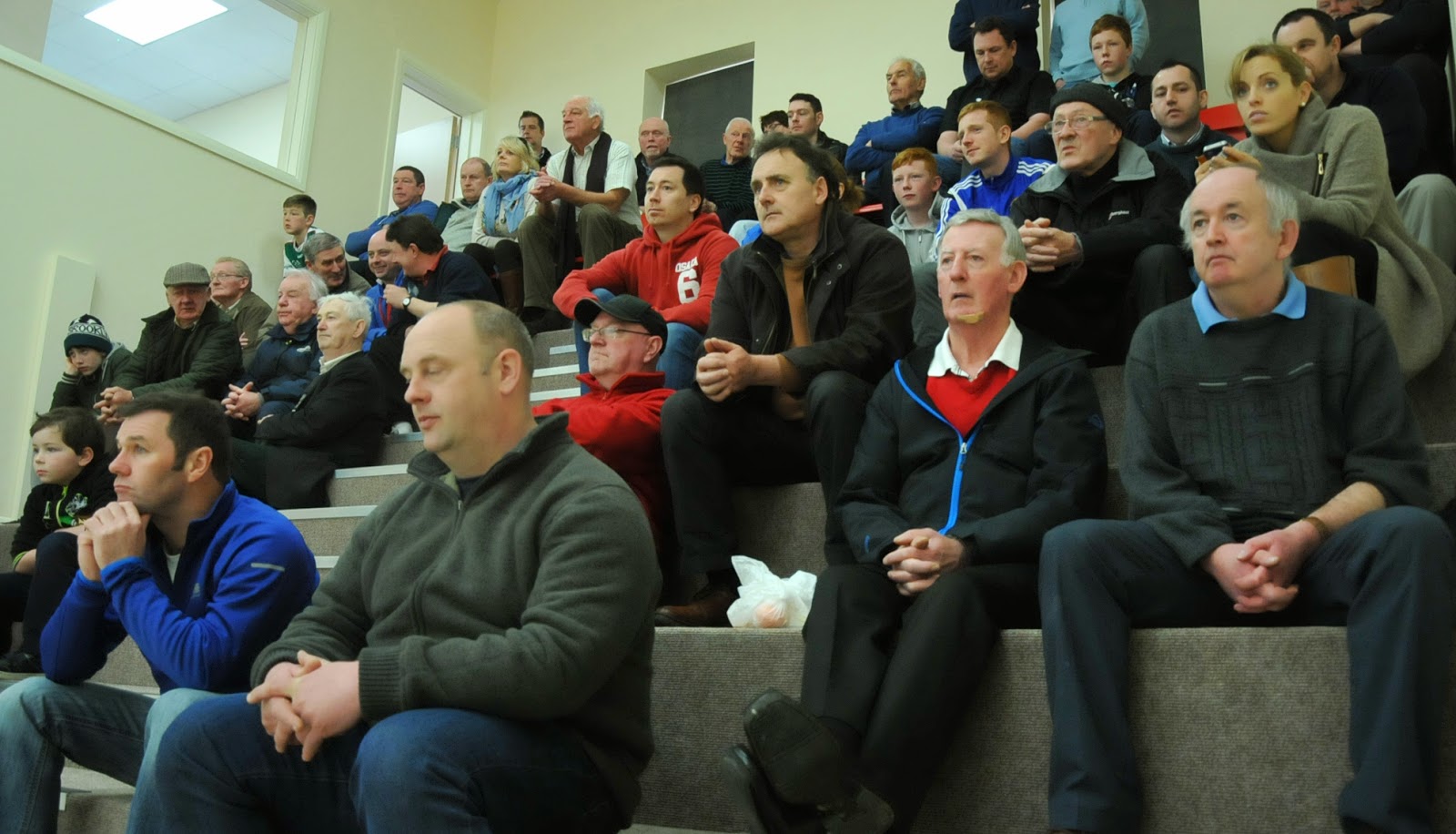 A near capacity crowd watched the World handball champions in action

There was standing room only in Collooney handball court on Saturday to witness the Quarter finals of Irish Handball 40 x 20 doubles championships sponsored by O’Neills, writes Michael McGee.

They all came to see one man in action and that was World Handball Singles Champion in Cavan’s Paul Brady. In fact there was 2 World Champions as his doubles partner Michael Finnegan won two World senior doubles titles in 2003 with Paul Brady and six years later in Portland Oregan with Dubliner Eoin Kennedy . Francis Mc Cann from the Ballymote Club was the referee and did an excellent job ensuring the contest was enjoyable for all in attendance.The  Cavan pair are aiming for an unprecedented 11th doubles title and a six-in-a-row. Their opponents Campbell Brennan & Vinnie Moran both from the Ballaghaderreen club in Mayo faced a torrid opening.  Finnegan playing on the right caused most damage to the Mayo men flattening almost every ball in sight in the opening minutes going into a big 11-0 lead. Cavan pushed even further ahead after Mayo failed to score when in serve.  Though not having to play at his brilliant best Paul “the Gunner” Brady showed great skill when returning a ball between his legs with exquisite ease.  Brady helped to blast the Cavan into an 18-0 lead. Mayo eventually got on the scoreboard and left handed Vinny Moran’s excellent return of the back wall delivering a superb left corner kill but it was not enough with the Breffni men’s solid showing running away with the first game by 21-3.

Mayo went into an early 2-0 lead at the start of the second game but it was short lived with Brady’s scintillating daisycutter serves to Moran’s left side and Finnegan’s thunder bolts and rollouts put Cavan well out in front by 10-2. Campbell Brennan got more into the game for Mayo displaying great split second reflexes.   Brennan dived full stretch to meet what looked like a Brady winner to place the ball into the left corner for Mayo’s fourth point. This was greeted with huge applause from the Mayo’s faithful .Brennan’s accurate serve to Brady’s left forced the World Champion to put the ball onto the ceiling to reduce the Champions lead to 10-6.  It was the closest Mayo would get however.  Cavan took control again and Brady with an unbelievable return of the back wall put Cavan out in front by 14-6.  Mayo’s “pocket rocket” Vinnie Moran used his great left handed power strokes off the left side to gain a number of well executed scores but it was never going to be enough as a rampant Cavan closed out the second game emphatically with Michael Finnegan especially great work inside and another couple of rollouts helped Cavan into the All-Ireland Handball Championships semi-finals the following day.

Following the contest the champions complimented everyone involved in the Collooney handball club for the excellent 40 x 20 playing facility. Brady confirmed he wants to return in May for a exhibition match against Connacht Champion in Mayo’s Joe McCann. By which time he could be All-Ireland handball doubles champion for the 11th time and to have a made a clean sweep (five out of five) in U.S. pro tournaments.     The May handball showdown in Collooney is likely to capture the attention of the entire Sligo G.A.A. fraternity.
Posted by Unknown at 20:24