First into action was the legendary Paddy Walsh against Cork’s Pat O’Brien. The Sligo star had a very slugglish start and quickly found himself behind by 15-1. With great encouragement from the home faithful he began to claw his way into the game and found his rhythm.  A dominant spell by Walsh which yielded 11 straight points in a row saw the Cork man’s lead reduced to 3 (15-12)  O’ Brien got a great pick of the back wall and his return landed inch perfect onto the front wall and he quickly took the first game with a tap in to the left corner by 21-16.

In the second game Walsh started brightly with a 7 point salvo.  Although O’Brien fought back to within touching distance at 10-6 behind it was the closest he was going to get as Walsh assumed control and he took game two with an ace to O’Brien right hand side by 21-6.

In the deciding 3rd game Walsh looked to be going out of the championships with O’Brien going into an almost insurmountable 16-7 lead.  Just like in his Connacht final success over Galway’s Peter Mulryan , Walsh staged a remarkable recovery. Again with the County’s faithful supporters fully behind Walsh the fightback began. A now rejuvenated Walsh with an extra pep in his step exploded into action and with a barrage of quick fire points fought back quickly to level at 16-16.  The momentum swung back in Walsh’s favour. Walsh gritted his teeth and went for the jugular.   O’Brien appeared shell shocked with the onslaught from the Sligo star.  Walsh the Sligo handball warrior finished strongly.  The Cork man managed to save 3 game points but the Sligo man was not going to be denied thus winning it out overall by 16-21, 21-6, 21-16. Walsh will now play Dublin's Ned Flynn in the final. Flynn defeated Antrim's Seamus Graham 21-18, 21-20 in his semi-final.

In the Masters B singles semi-final Shane Bruen came into the semi-final following a successful Connacht campaign.  Standing in his way was Clare’s Tom Kirby of the famous Kirby clan who dominated handball in Ireland and at World level in the 1970’s and ‘80s.   Bruen had a dream start in the opening game hitting the front with a huge 17-2 lead. However a finger injury forced him to take a time out to get some treatment before resuming play.  Bruen looked the more livelier player to advance throughout while Kirby had a very relaxed style. Kirby, the Munster Champion was a dogged and stubborn opponent who refused to go away  quietly and kept coming back for more and Bruen had to be alert at all times to stoutly defend his lead.   Kirby fought back to 19-13 behind and forced Bruen to serve game ball 3 times before the Yeats County man finished in style. Kirby brilliantly returned game ball inches from the bottom of the back wall but Bruen with an exquisite passing shot passed Kirby’s left side to win the opening game by 21-16.

In game two there was no more than 3 points between the players until the final stages such was the closeness and intensity of the contest.  One of the highlights of game two was a number of long high tempo rally’s. At 10-9 ahead a long 30 shot rally was played out before Bruen winning the point with a precision score of the back wall that landed inch perfect onto the front wall. Bruen’s showed great willingness to work hard and covered every inch of the Collooney court and his greater fitness eventually wore down a resolute and ever improving Kirby. Bruen was patient in his build up and was content on keeping the ball onto the ceiling waiting for any openings that might come from the Clare’s returns. Kirby began moving in to shot volleys and came within touching distance. Bruen’s lady luck shone on him a number of times when winning vital points while Kirby’s sometimes too relaxed style of play cost him dearly as he spurned a number of glorious chances close to the front wall when in good positions.  Bruen changed serve and began an over hand serve landing in Kirby’s left corner.  With a slender 15-14 lead the Collooney club star played his best handball and stretched his lead to 19-14 with a number of good kills off the back wall.  The highlight of the entire match was an energy sapping and lung bursting rally with over 40 shots thrown in before Bruen bagged it with an accurate kill to the left corner.  He duly took the second game by 21-16 much to the relief and delight of the home crowd.  Bruen will now face Wexford’s Barry McWilliams in the All-Ireland Masters B singles 40 x 20 final on Saturday 14th March. 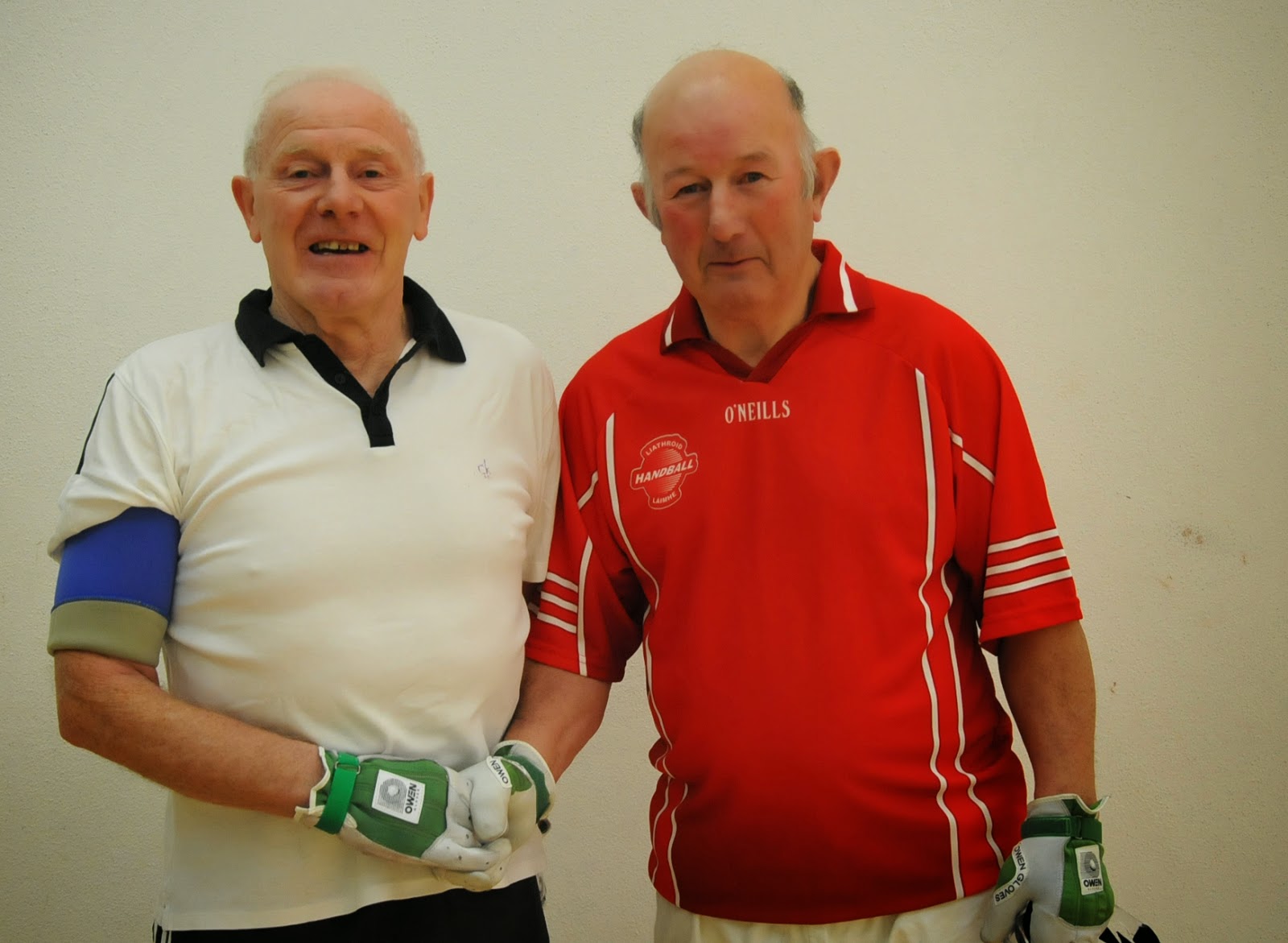 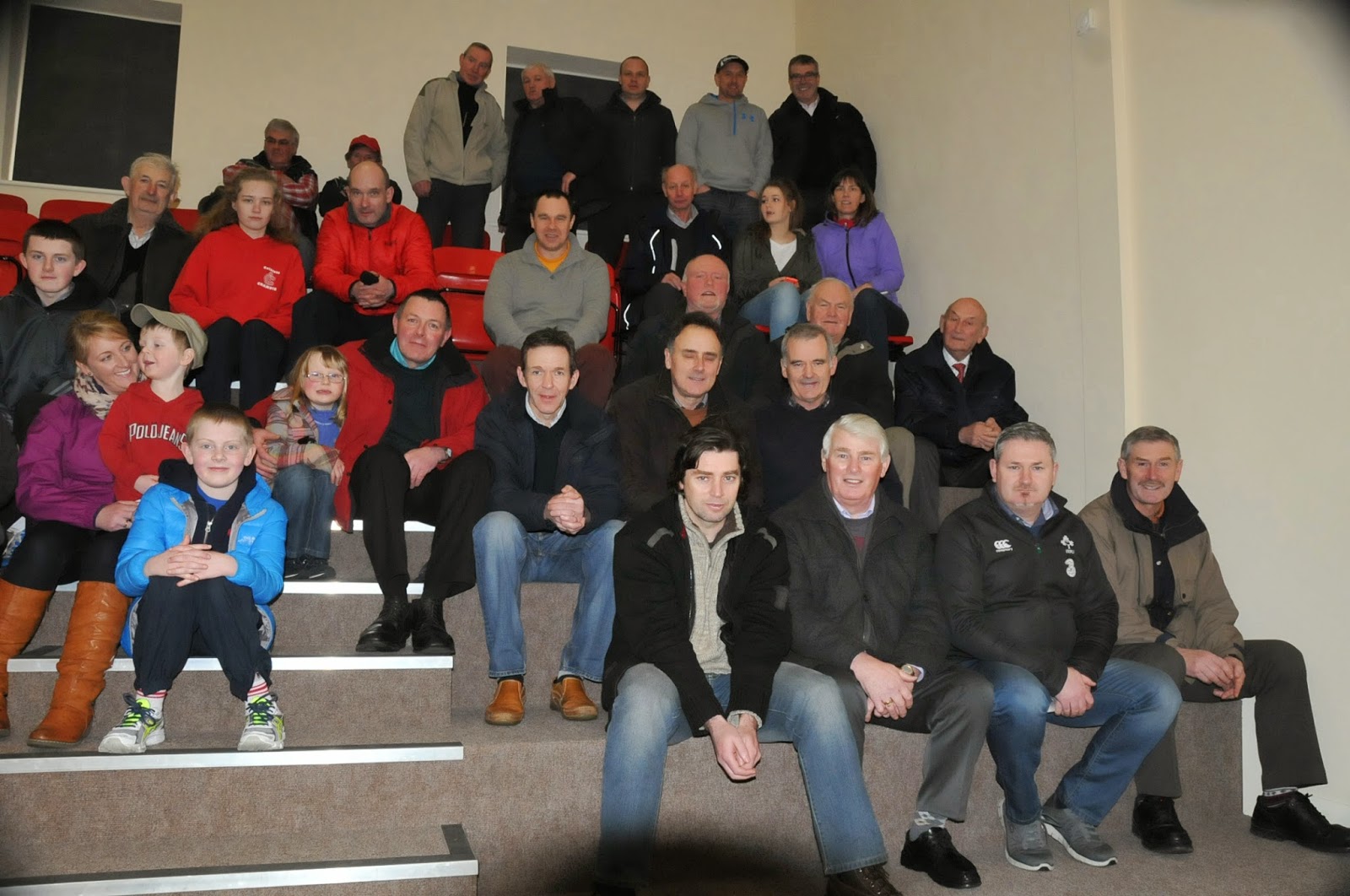 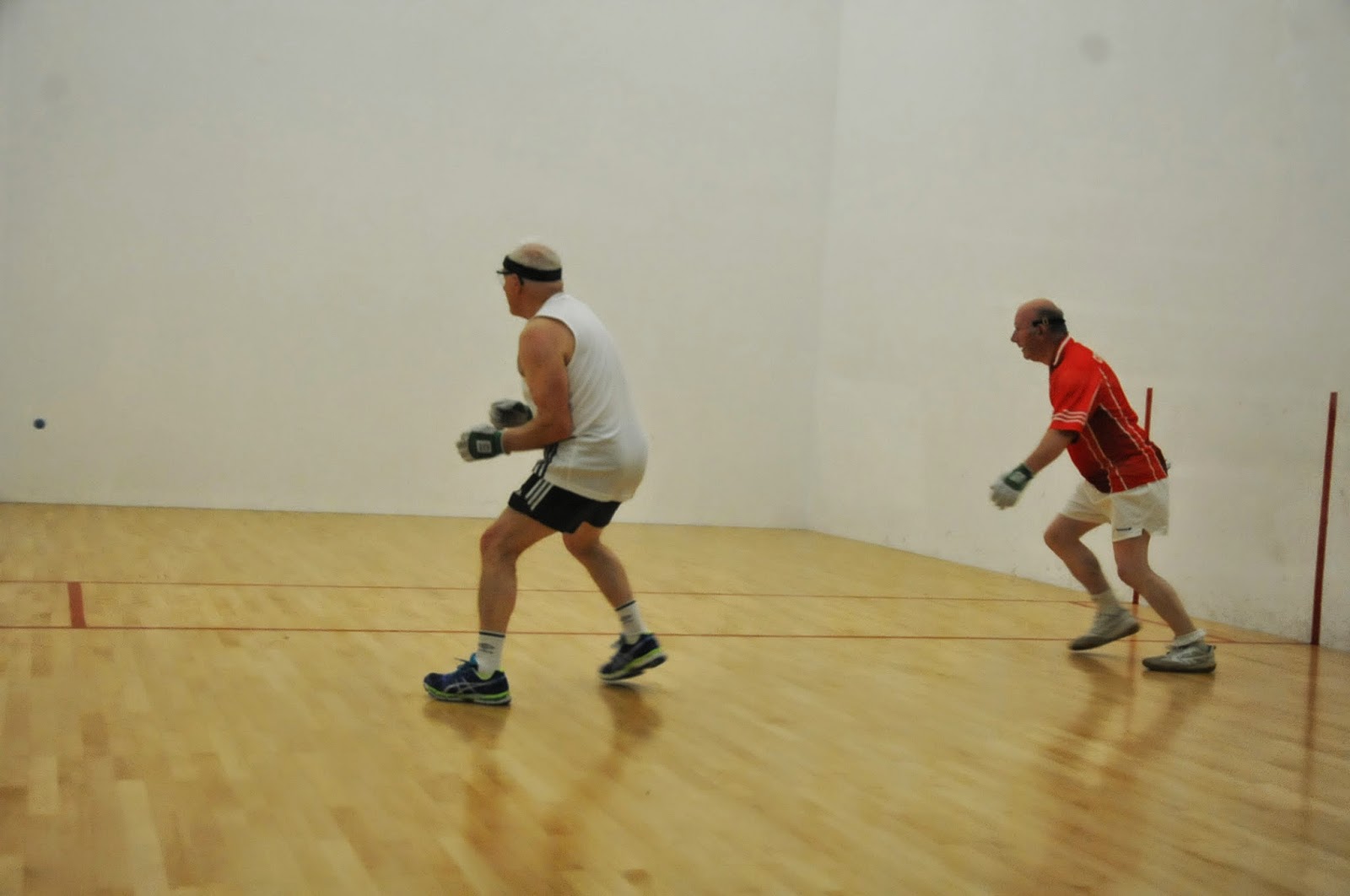 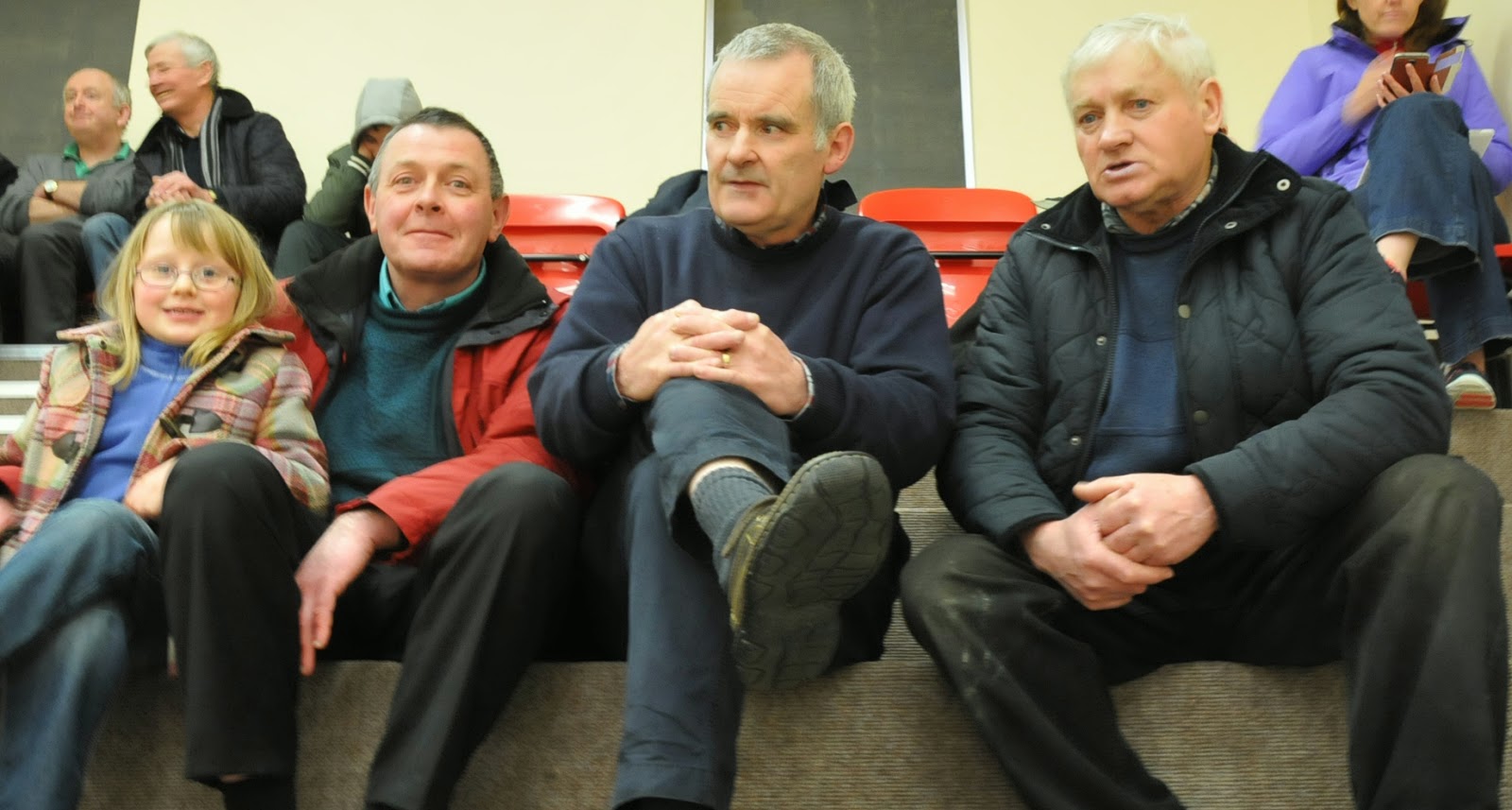 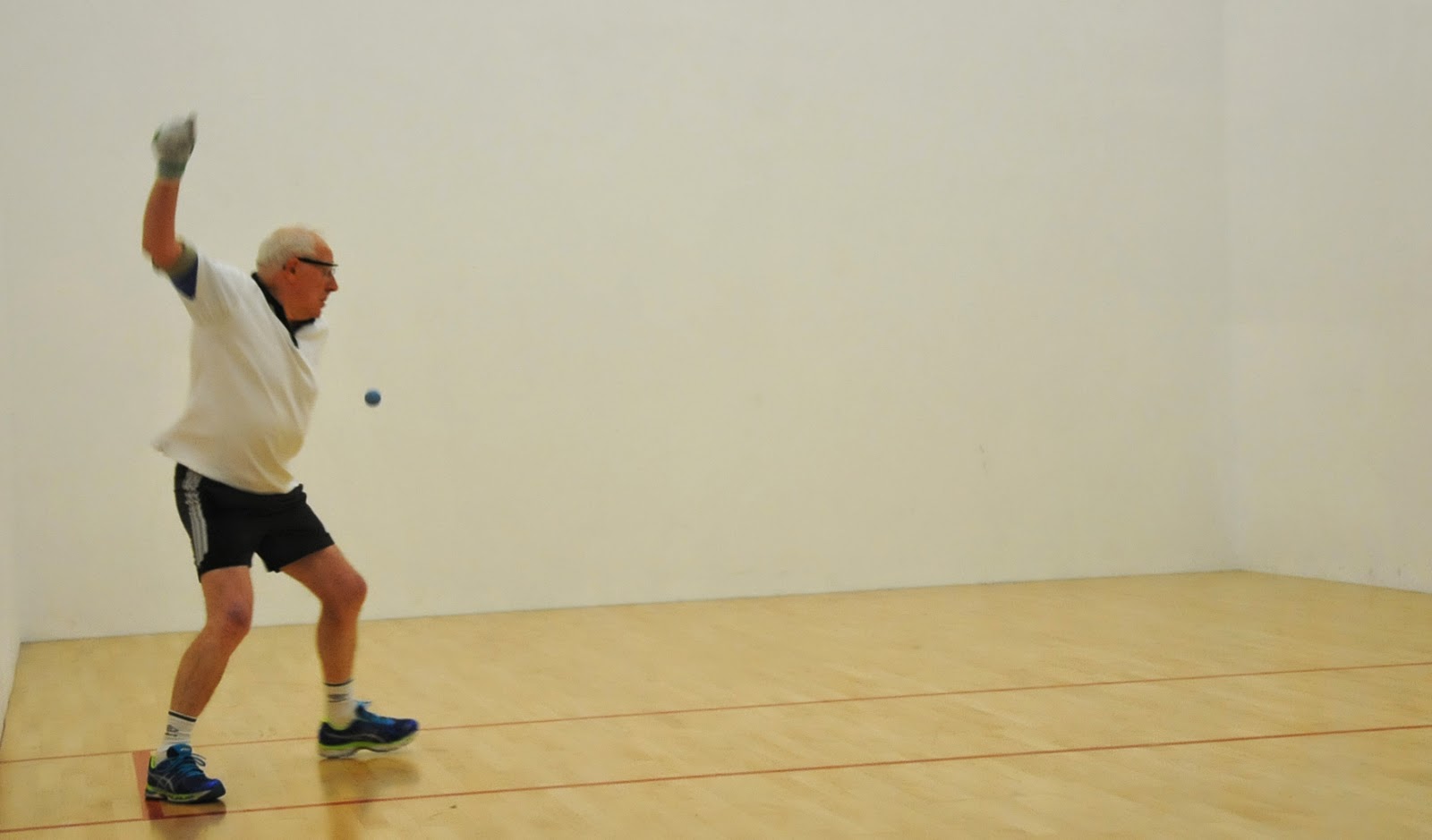 The legendary Paddy Walsh in action 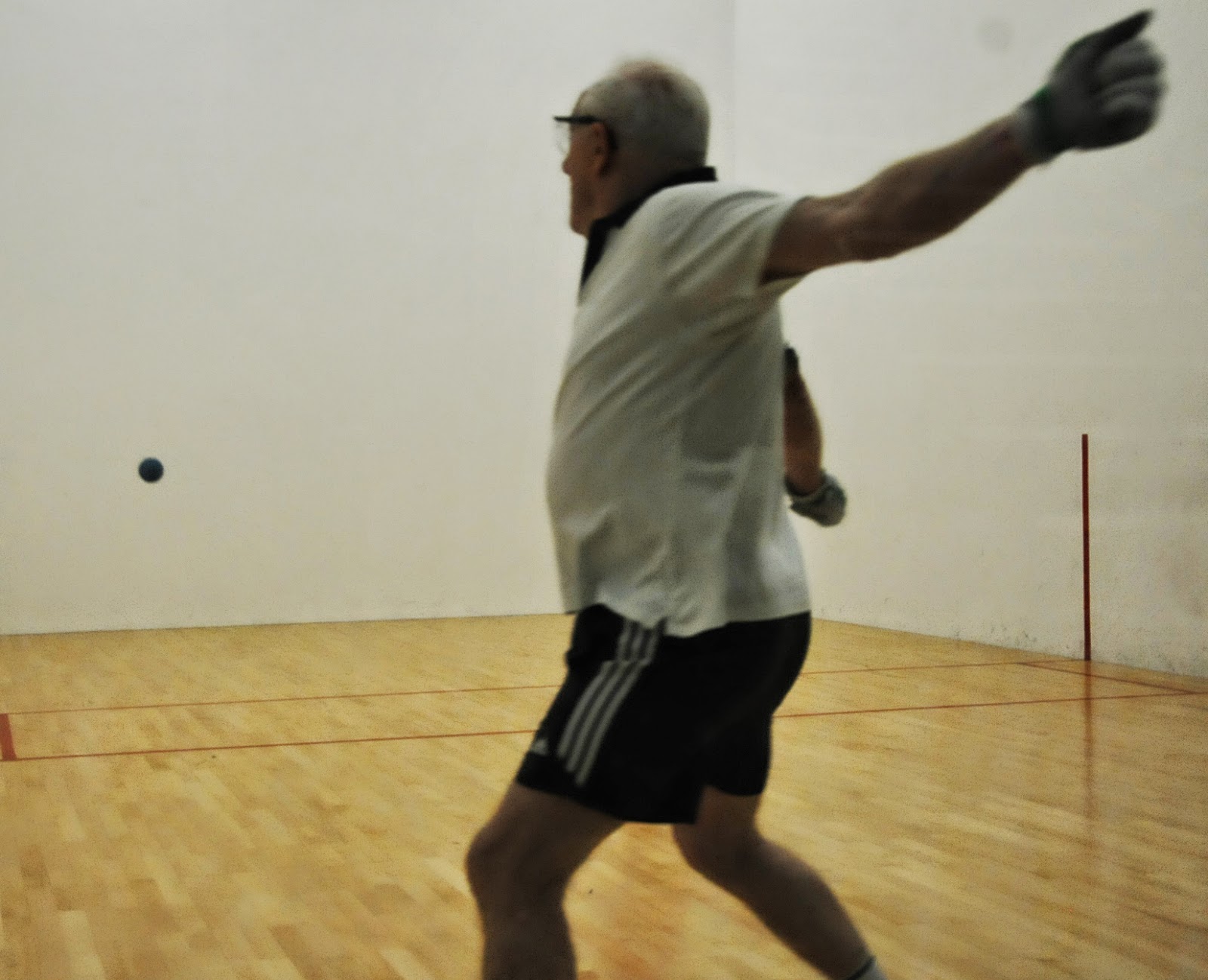 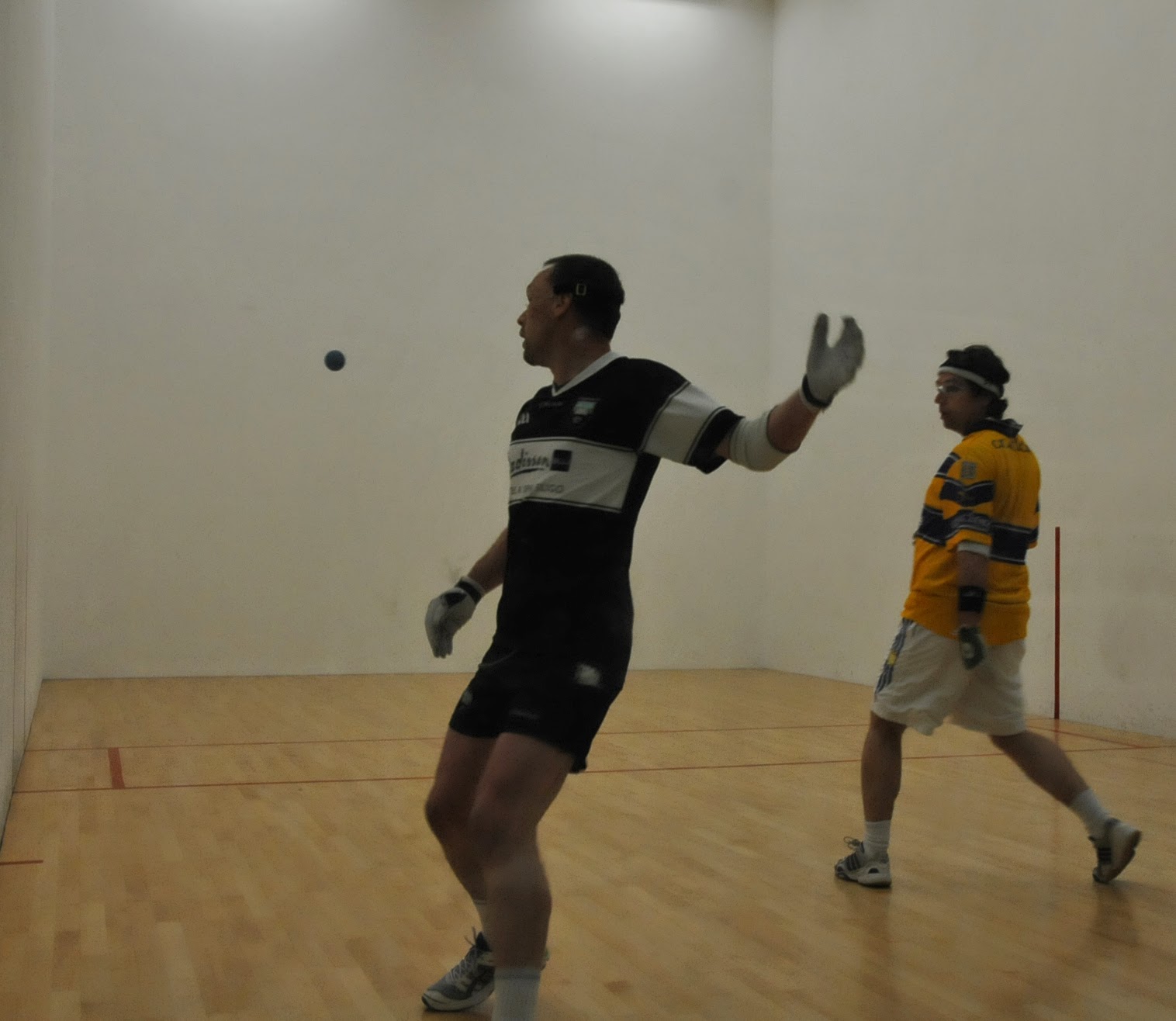 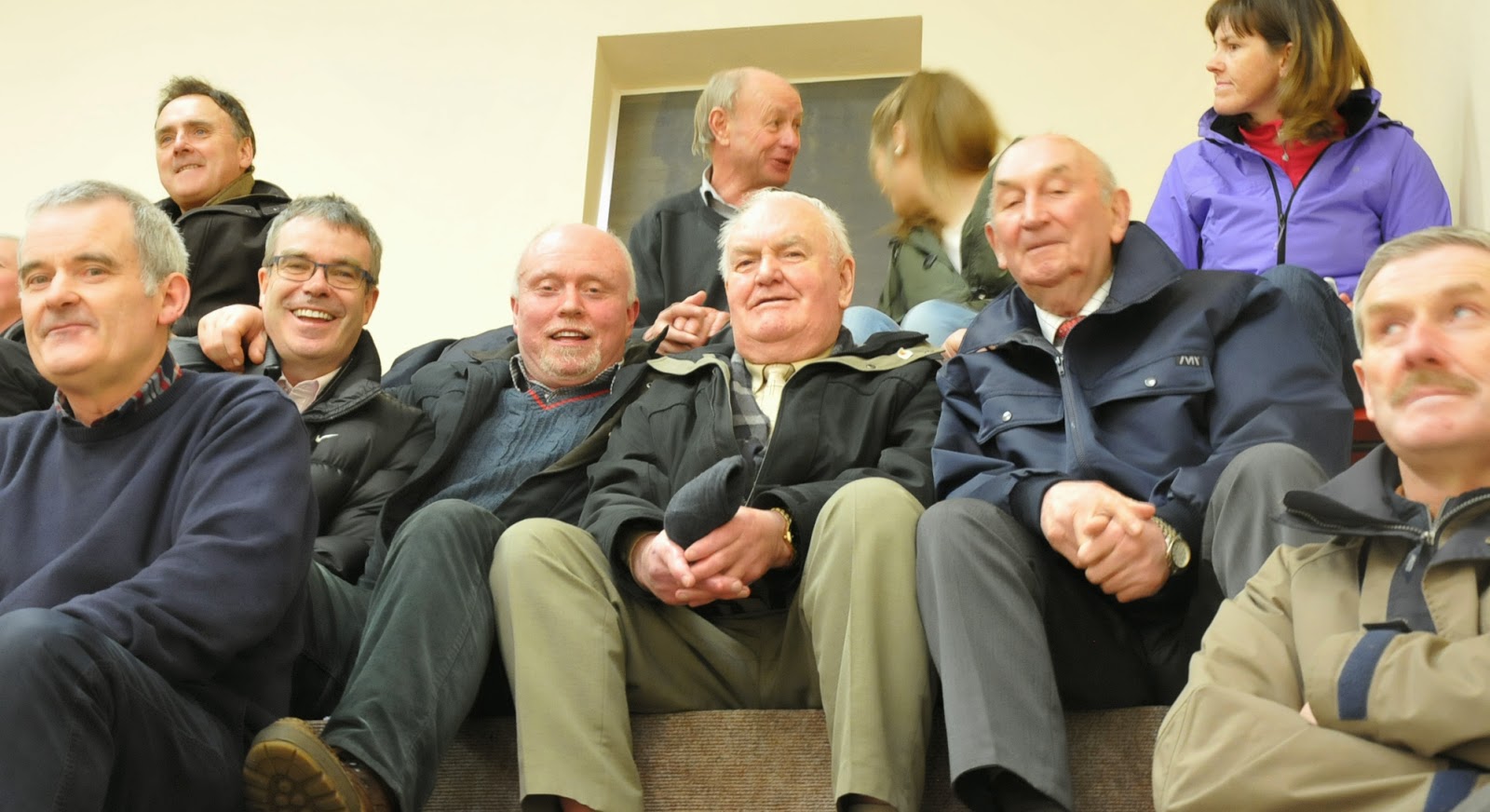 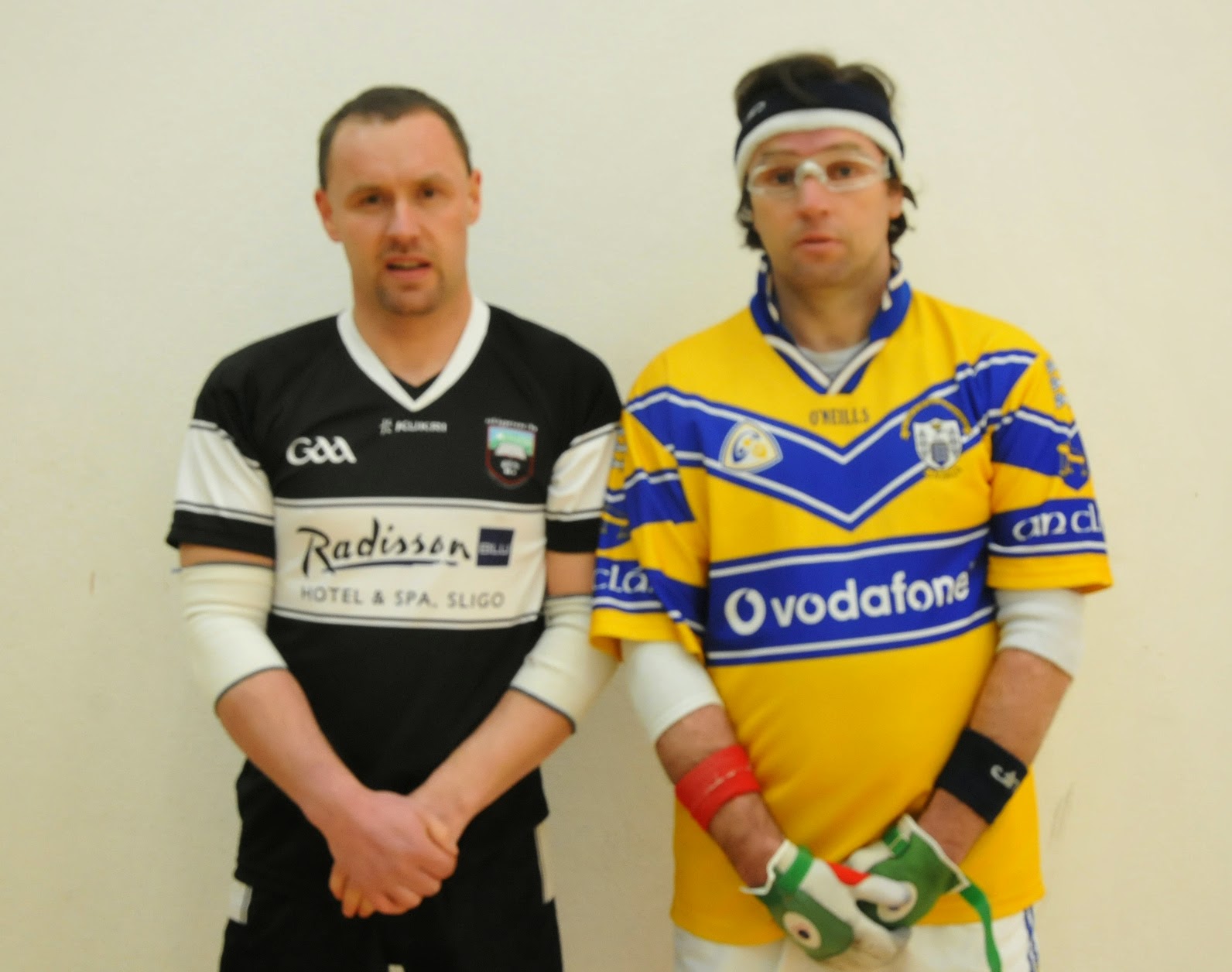 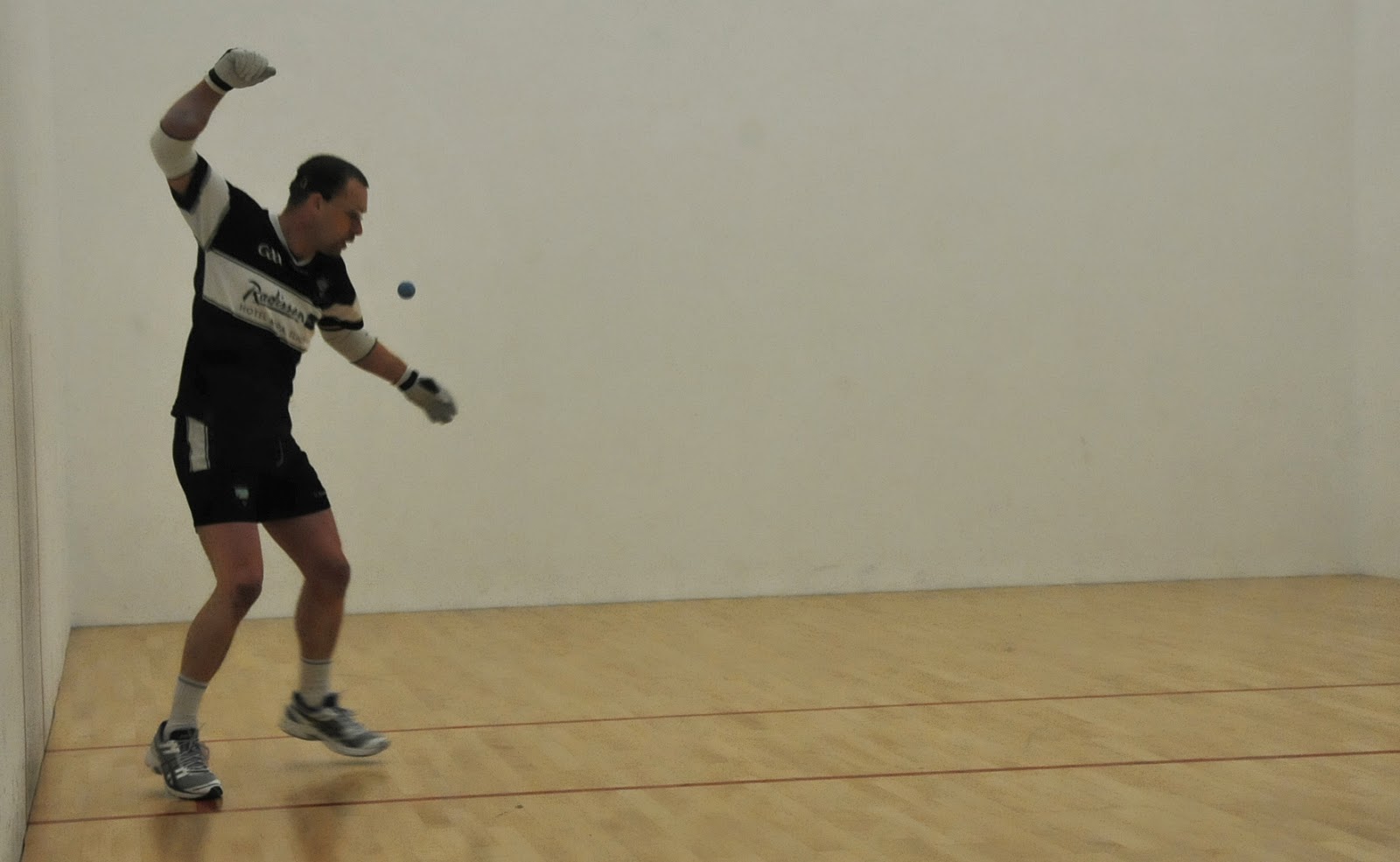 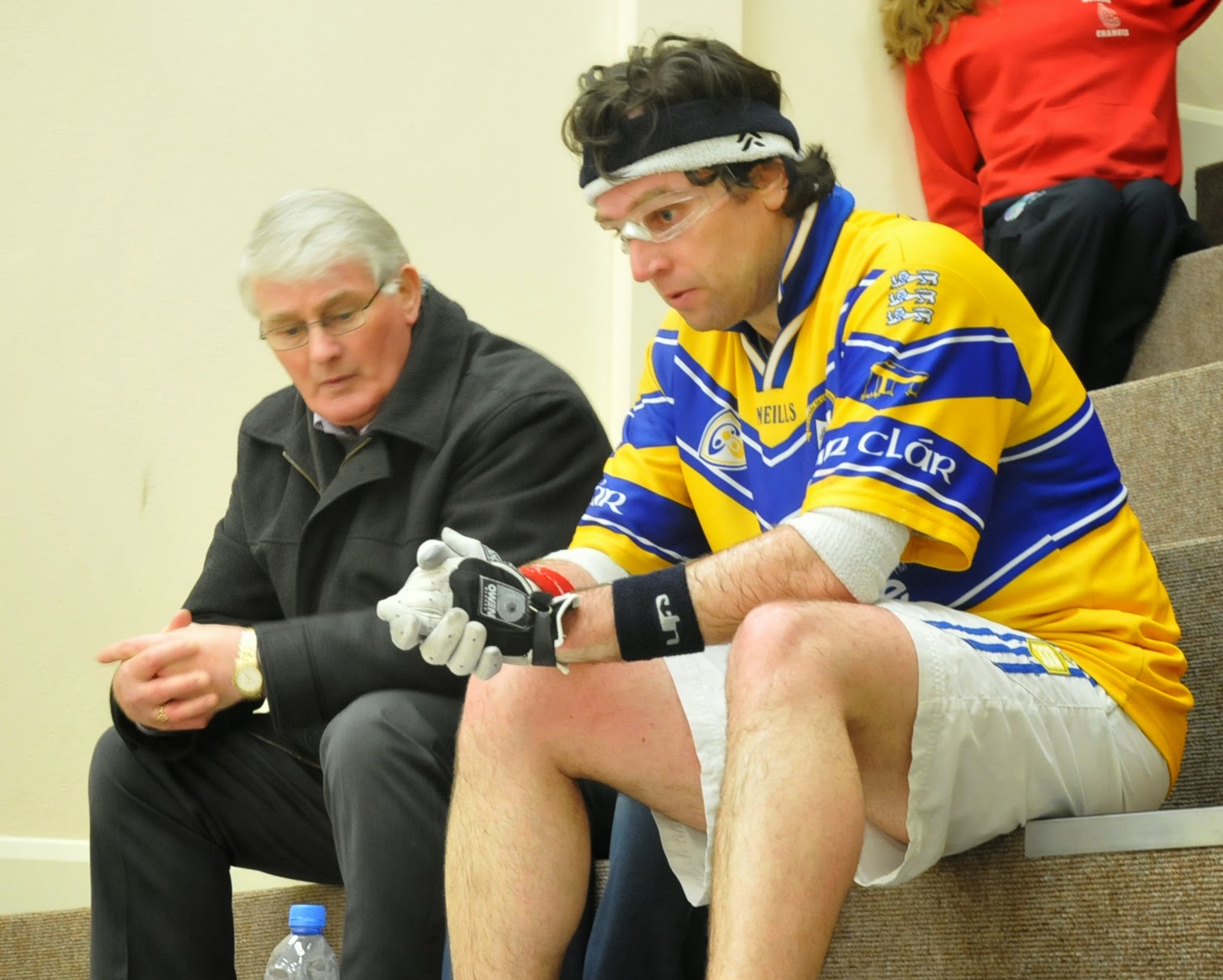 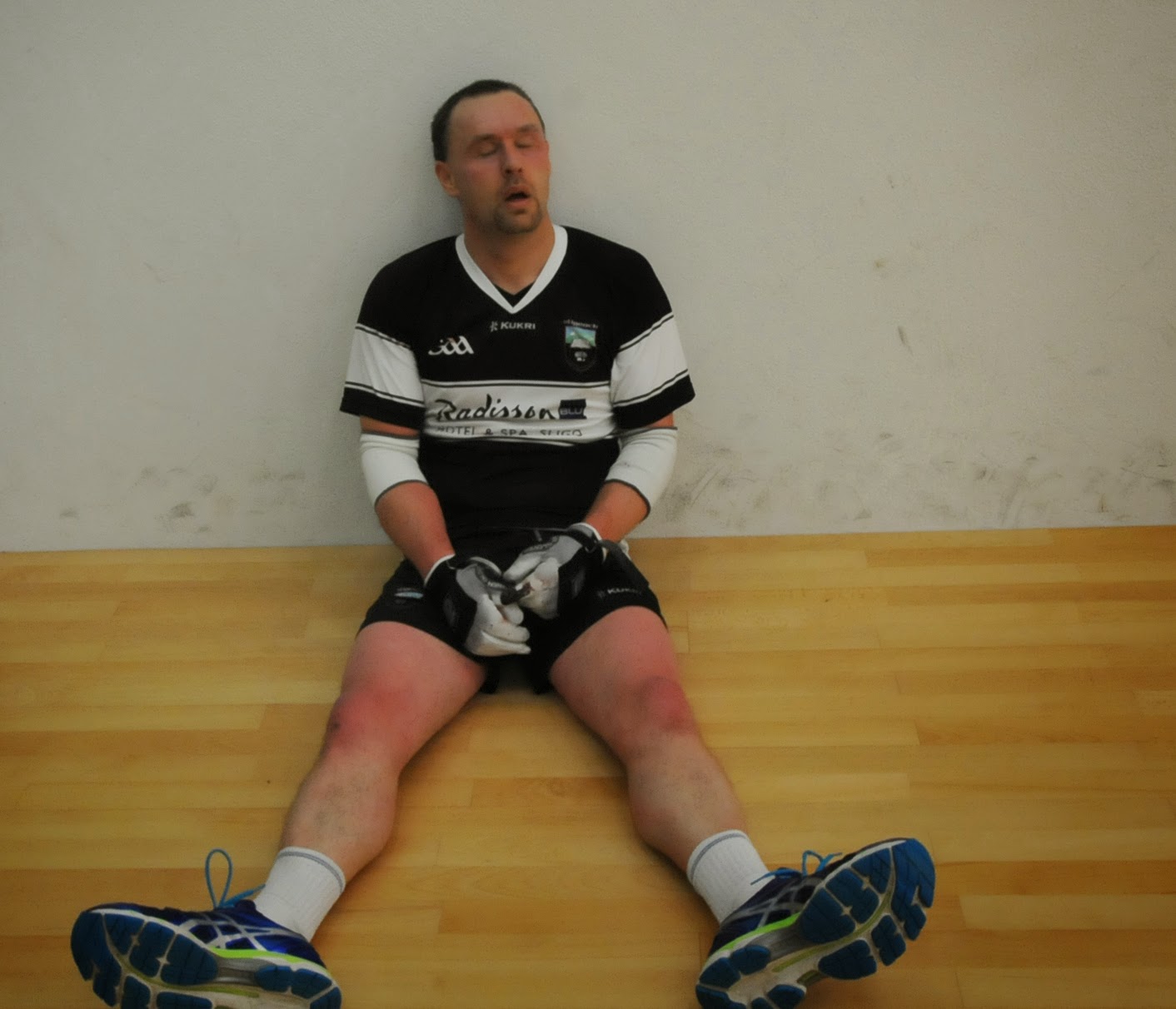 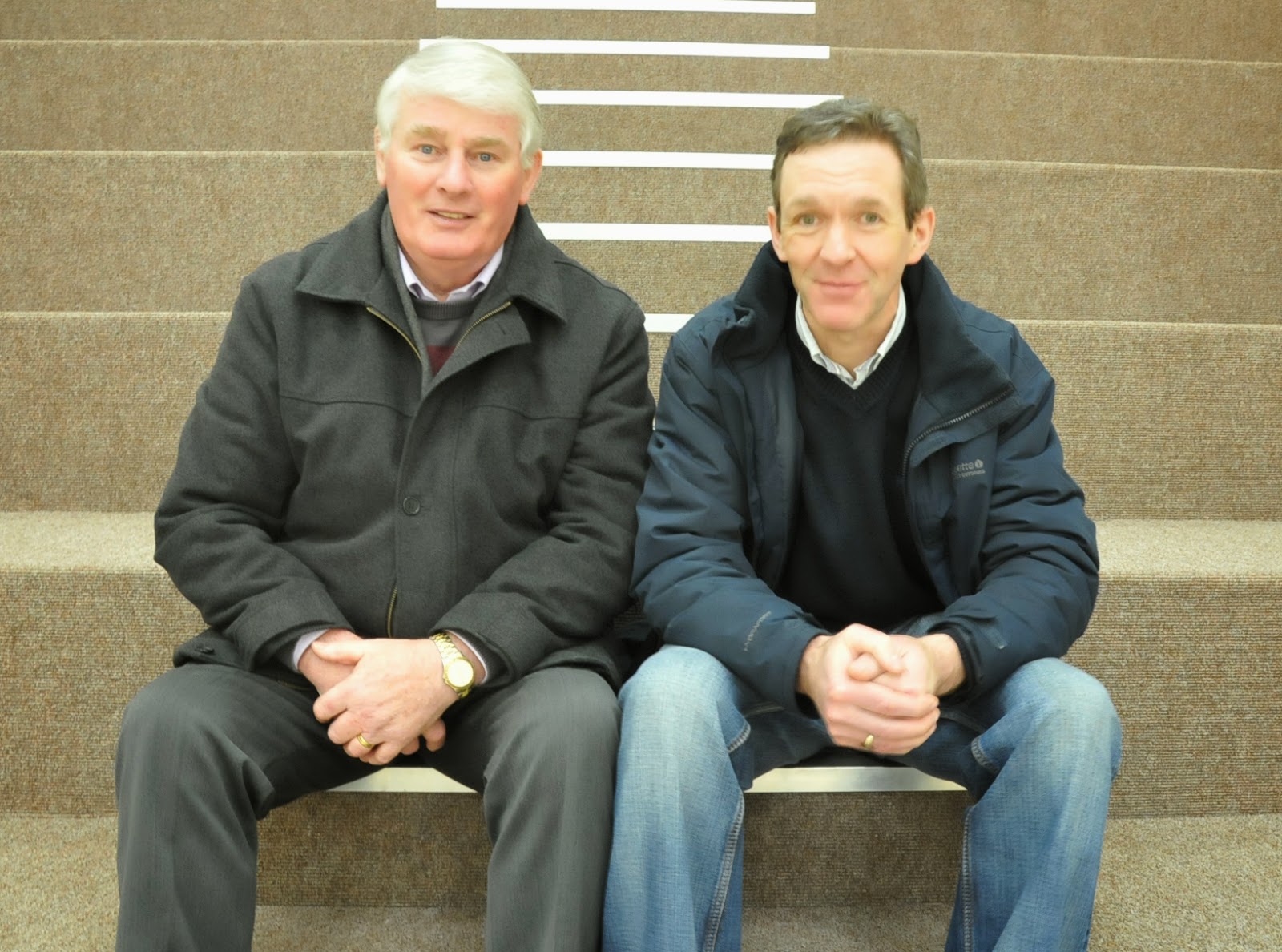