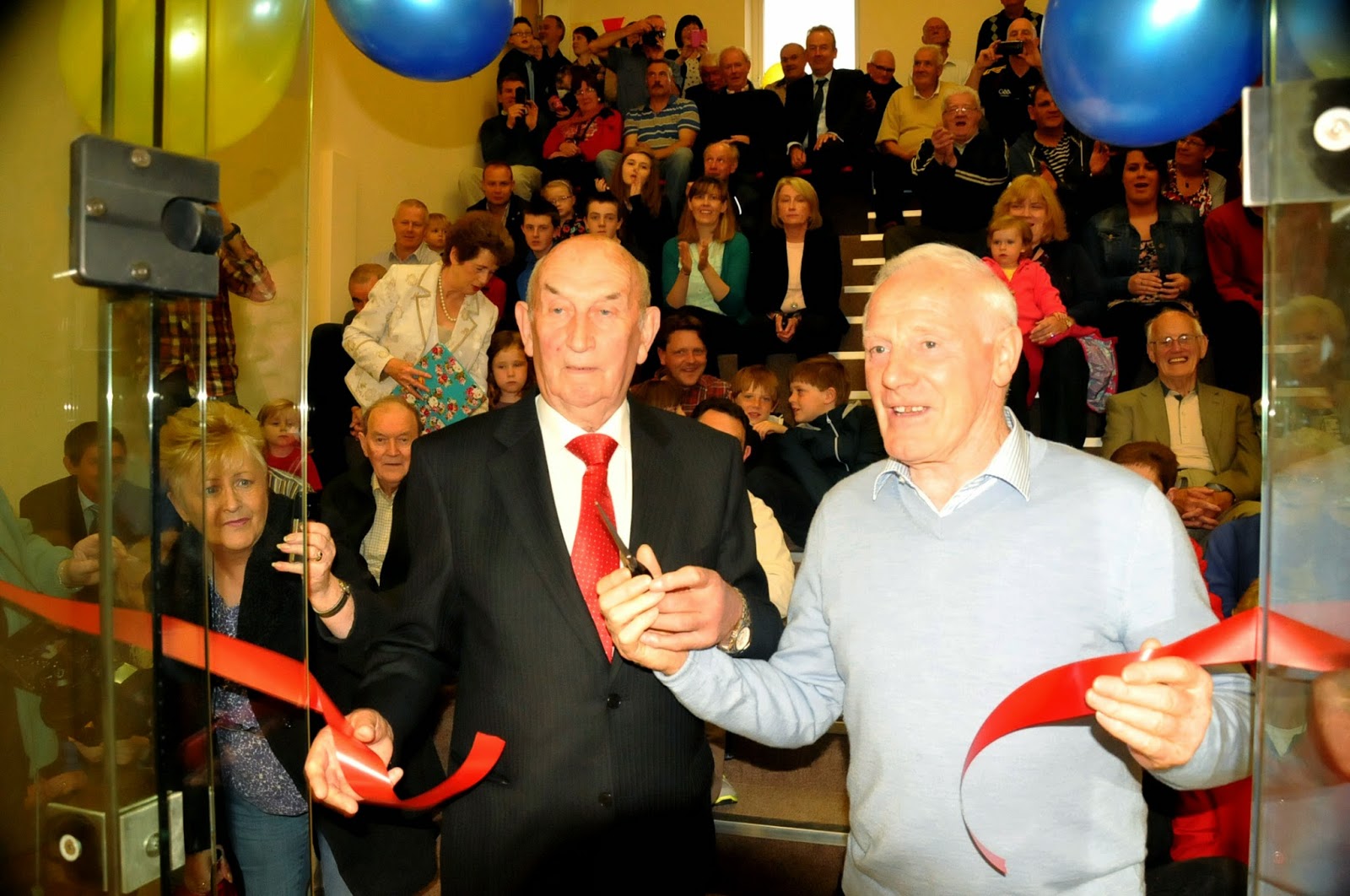 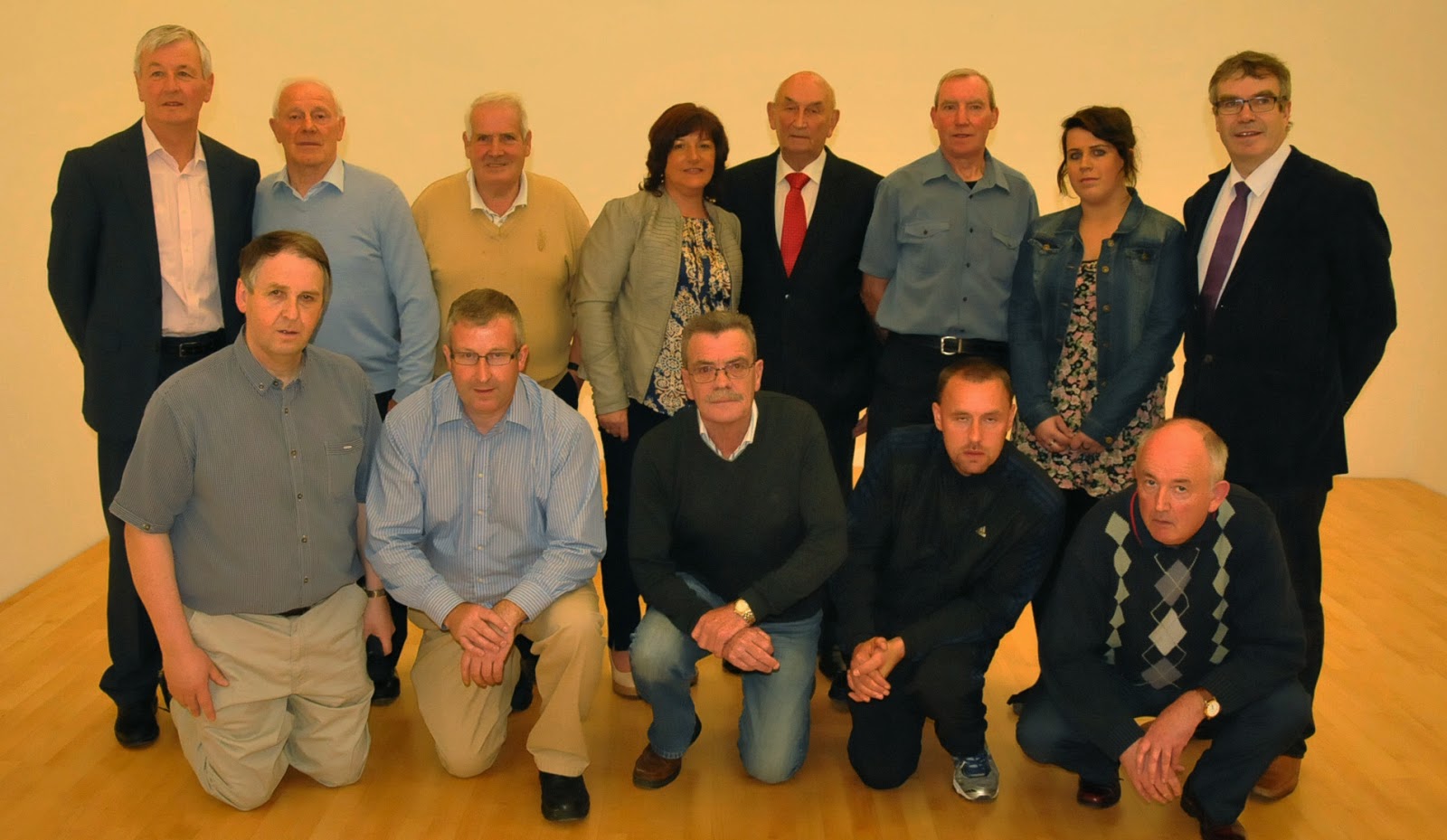 After many years of dedication, hard work and commitment the Collooney handball Club Committee were at last able to celebrate the opening of their state of the art 40 x 20 handball court last Friday evening, writes Michael McGee

A huge gathering of people from all over Ireland attended the opening of the Collooney handball 40 x 20 court on Friday evening last. In attendance was Joe TaaffeSligo G.A.A Chairman, Eamonn McMunn Sligo G.A.A Administrator. Shane Malone Main Contractor, P.J. Moran Engineer on the project. Wexford Handball Secretary Tony Breen and his wife Betty made the long journey to Collooney.  Amongst the attendance was Michael McElroy son of William McElroy the Club’s first Secretary in 1928. Also there was Brian Cooper of Markree Castle the family who kindly donated a plot of ground on the Fairgreen where the handball courts are now situated. With the viewing gallery full to capacity the evening started with an Ecumenical Blessing by Fr. Pat Peyton P.P. Collooney and Rev Adam Pullen Ballisodare.   After the blessing two of the legends of the game in Sligo Paddy Walsh & Mick Kelly who between them have won 39 All-Ireland handball titles had the honour of cutting the tape to open the new €200,000 state of the art handball court. It was a case of double celebration for Walsh as he also celebrated his 74th birthday. D.J. Charlie Brown provided the musical entertainment.

Development Chairman Hugh McGarry gave the speech and began by sincerely thanking the Cooper Family of Markree Castle who kindly donated the ground in the Fairgreen back in 1928 where the handball court is built. McGarry had a warm “Cead Mile Failte” for Brian Cooper who was in attendance.  McGarry praised Fr. Pat Peyton PP Collooney who launched the plan back in 2011 and said “that the people of Collooney are very lucky to have him.”  “Fr. Pat is a tremendous help to us over the last 3-4 years”.   The Development Chairman thanked Tony McLoughlin T.D. who was instrumental in helping the club receive the €50,000 sports lottery funding from the Department of Transport, Tourism & Sport in January of last year which greatly aided the project.   He also thanked all the support received from the weekly Bingo in Collooney hall and acknowledged “that this would not have happened only for the support of their loyal supporters”. P.J. Moran a lecturer in Engineering was described as a “great guy” by McGarry.  “This was his ideas and plans and great credit to him.”  McGarry was full of praise for the main contractor Shane Malone “when Shane came on board my problems was solved.”  Shane is an absolute gentleman McGarry added.   Malone’s team of contractor’s Jimmy Kilgallon, Eamon Waters, Padraic Harte, Michael Harte & the Walsh brothers were also thanked for their excellent work.

McGarry remembered great friends of the club who are now deceased people like Willy Loftus, Ned Connelly, Mrs Jackson, Mickey Finn, Kathleen Finn, Gabriel Walsh & John O’Hara and with that there was 30 seconds of silence for those departed.   McGarry mentioned past players the Clifford brothers, Mannion brothers, Kenneth McKenna, Bergin brothers, Flynn brothers, Johnson brothers Ballisodare, Harry Colleary, Sonny Hennessy &Tom Colleary. The Development Chairman reiterated his desire to continue their development during the winter months to renovate the 60 x 30 court and have an Official opening  in Spring of next year.  All of the committee were individually thanked for their extraordinary dedication and commitment in the last number of years.  McGarry was delighted to see Michael McElroy son of William McElroy the first Club Secretary in 1928 looking hale and hearty at the opening.   McGarry looks forward to seeing the club players reach their potential in the years to come and that the new generation will also bring great success to the club.