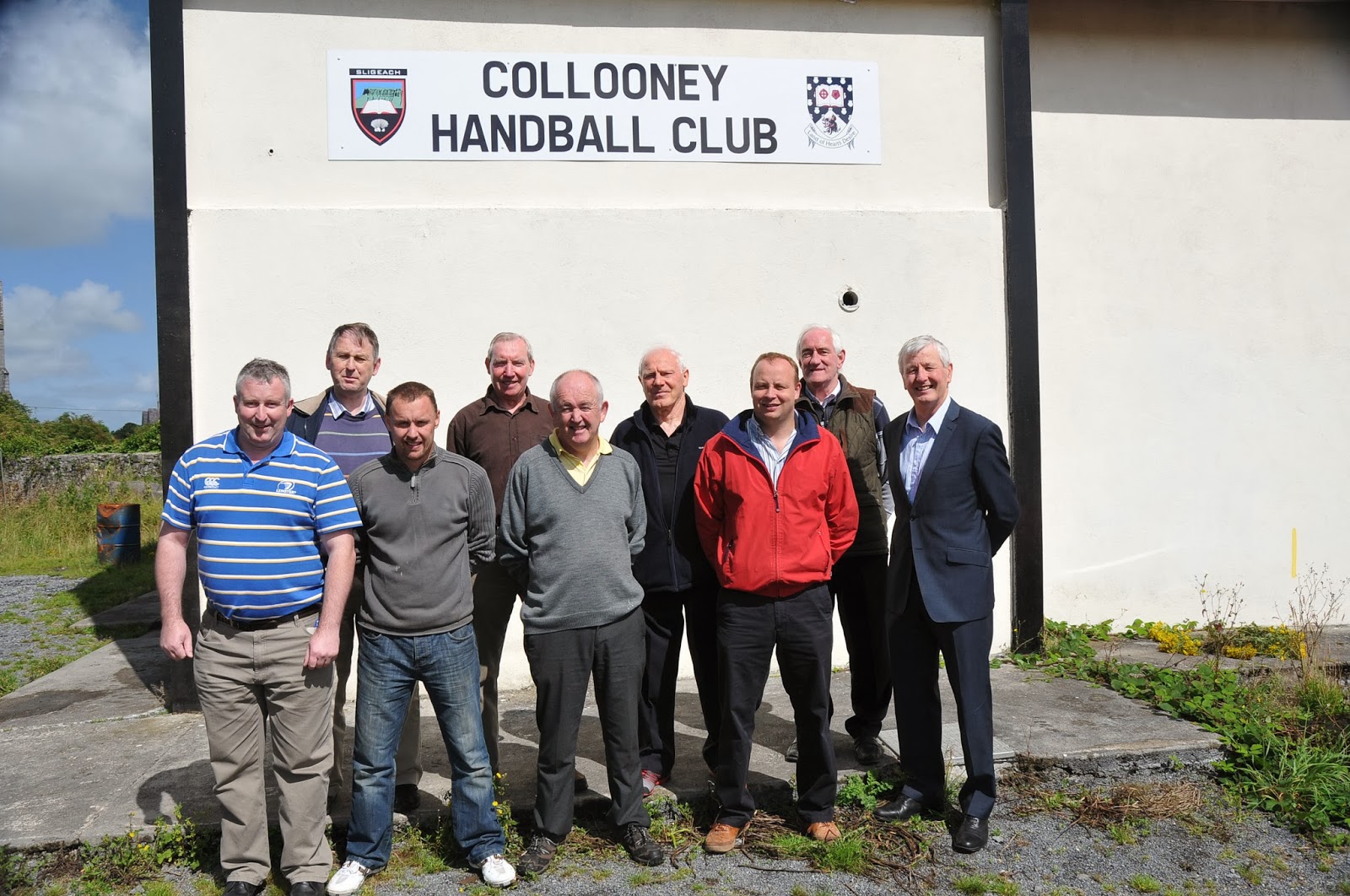 It is a momentous & historic occasion for the Sligo club in what has been a long time coming.

The Club has been in existence since 1928.  The then Chairman Alfie Higgins a signal man on the Midland Railway and WP McElroy and Secretary approached the land owners the Cooper Family of Markree Castle who kindly donated a plot of ground on the Fairgreen. At the official opening in 1928 Joe & Paddy Bergin who had local connections and were residing in Tipperary played Jim Hunt & Eddie Perry from Sligo. Others who played included Joe Lane, Guard Cunnion from Ballintogher, Jim & Mickey O’Rourke from Ballisodare.

In 1996/97 the height of the walls was extended to 27ft and the installing of a new floor. Dressing rooms were added in 1999.The old galvanised roof was replaced in 2001 with a modern roof. With the added facilities Collooney hosted many Connacht handball championships matches and a number of All-Ireland semi-finals & finals.

The idea of a 40 x 20 handball court was first mooted in 2007 by Paddy Walsh, & Stanley Harte club stalwarts and others who were coaching the young players in Collooney.    “It’s a pity they don’t have a 40 x 20 Court with a glass back wall to train in”. Club Chairman Hugh McGarry immediately recognised the potential in the young players but without the proper facilities they could not advance the coaching.

“I was also very conscious that if Sligo had a home game & venue we didn’t have a Court with a full glass back wall that could accommodate a crowd that would see all the action – the St. Mary’s facility in Sligo was made up of concrete and glass back wall.”

And with the idea now firmly ingrained in McGarry’s mind a committee was formed. Fundraising for the new handball court began in 2008 with tickets sales bringing in €13,000 initially.  In August of 2009 Andy Healy (a Sligo native) President of the Boston Sligo Association handed over $2,000 to the club following a St. Patrick’s Day fundraiser in Boston to club officials in Collooney handball club. Most recently the Club was grateful to receive €50,000 from the Department of Arts Sports & Tourism in January.

The plans for the handball court was unveiled in January 2011 in Collooney. Indeed the handball club got much satisfaction from the local Owenmore G.A.A Club with its award winning grounds and more recently the playground in the Fairgreen. Chairman of the Owenmore G.A.A Club Martin Cannon spoke at the unveiling of the plans as did Sligo G.A.A Chairman Cyril Feehily & P.J. Moran the technical advisor.

The Club have taken a loan out of €76,000 from “Clan Credo and the money is being paid back by two sources of revenue the Bingo and from the club members themselves who put in €5 every week.  The club welcomes anyone who is willing to contribute to the project to come on board.  The bingo will be running for 3 years in September each Thursday night and is successful to date. Former Chairman of the Collooney Club Brendan Carey was the first who suggested that the club get involved in the weekly bingo and this has been running every week since.

The project almost never got off the ground according to the Chairman. “It was vitally important that the new 40 x 20 Court would be built adjacent to the existing 60 x 30 court so that the two facilities would be side by side in the one venue. At first The Park Committee who own the park were reluctant to give up any ground. The club got around this stumbling block by buying additional ground beside the Park and in turn  exchanged that ground for the ground on which we are now presently building the 40 x 20 court.  The Park Committee were happy with this, thus allowing the project to proceed.  McGarry played a pivotal role in this making sure that the project would progress and has worked tirelessly on it.

The main contractor is Shane Malone from Boyle. Shane has already built two award winning developments in Collooney at Bramble Hallow and at Hawthorn Court. The Club’s Technical Advisor is none other than P.J. Moran an All-Ireland winner with Roscommon.

The cost of the entire project is costing €200,000 to build. The club nominated the legendary Paddy Walsh to deliver the commencement notice to Sligo County Council. Walsh the club coach along with Mick Kelly, Stanley Harte & Shane Bruen has twenty eight All-Ireland handball titles in a glittering career going back to 1974 when he won his first All-Ireland medal.

“It was appropriate that Paddy would be given this task as he was one of the main people to push for the erection of the 40 x 20 court in Collooney and he was always of the view that to develop good players you must have the right facilities,” said McGarry.

It is expected the project will take eight months to complete. The weekly bingo has become an integral part of the fundraising and the club have given a commitment that it will be held every Thursday hail, rain or snow.

“There is something very nice and special about the Bingo in Collooney and our patrons have told us on many occasions how much they enjoy coming to Collooney because of the welcome and the fun that they have.”

McGarry explained: “the people of Collooney want this project to succeed.  They realise that there is a huge history attached to the existing 60 x 30 court and they know that by the building of the 40 x 20 court beside it that Collooney will be the main centre for handball in the County.  They feel that this is rightly so because of the road networks – easy access in and out.”

It says much for the Collooney handball committee that even in these difficult  economic times the project continued at pace while other sporting projects were either cancelled or curtailed. It is a point that I am sure will not have been lost with the  the Sligo G.A.A Board who will have been hugely impressed with the Collooney handball club ambitious project as not a cent was taken out of the Sligo G.A.A Board’s coffers.

The sod turning ceremony took place on Friday May 18th 2012 and was attended by local politicians, G.A.A. Officials & the people of Collooney.  What pleased the Club most was the entire Collooney community turned out for the celebrations.Local G.A.A stalwarts Michael Flynn & Maureen Mullin were given the honour of turning the first sod on the club’s new handball court. Maureen Mullin was treasurer of the St. Feichin’s Community Games from 1973-1998 and Treasurer of the Teeling Centre for the past 27 years.  Michael Flynn was handball trustee back in the 1970’s.

Even a camera crew from TG4 attended on that beautiful warm Friday evening. Three people spoke at the sod turning ceremony Cyril Feehily Chairman of the Sligo G.A.A Board, Peter Chambers the then Chairman of the Sligo handball board and Hugh McGarry Club Chairman. All three speeches were delivered eloquently & expressively. Chairman Hugh McGarry the last to speak and in a rousing speech to all present remembered everyone who helped the club down through the years, the players, committee members, sponsors.  That long speech by McGarry will be best remembered in his closing sentences taking the lines from a famous Barack OBama speech when he said “stick with us and we will do it. Is feidir linn”

McGarry recalls the great club players of the past & present who dearly loved to see the project come to fruition and mentioned the names of the late Paddy Callaghan, Kenneth McKenna, Michaél Flynn, Aidan Flynn, Malachy and Dermot Flynn, Brendan Carey, Peter Francis O’Connor;  Aidan McGoldrick and many more.

While the machines were working away McGarry’s reminiscence on the players he played with. The Committee members of the Park, who at the end of the day, agreed to transfer that bit of ground to us. “The Committee known as ‘The Pound Committee’ who transferred the section of ground that leads from the Ball Alley down to the public road is now so vital for car parking and the playground there – people like Marie Lang, the late Eddie Tighe and so many more.  The many business people who have given so generously down through the years, people like Michaél Flynn,  Mick Eames, O’Connors of Ballisodare; Tony Gray; Andy Healy and the great people of Collooney who have supported this Club financially and otherwise since 1928 – people who have gone to their eternal reward, Kathleen Flynn, Ned Connolly, Tommy Mullen  and many more.  These people are in our thoughts today and will never be forgotten.”

Next month there is a rock festival on the Fairgreen but already all in the Collooney handball club are rocking with the prospect of a new and modern 40 x 20 handball court. Dreams are made of this......
Posted by Unknown at 18:00